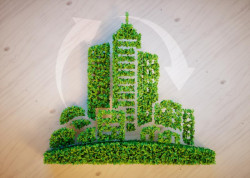 The term “sustainable development” refers to the development that meets the needs of the present without compromising the ability of future generations to meet their needs. This definition emerged in the report by the World Commission on Environment and Development “Our Common Future” in 1987.

In 2015, the UN published 17 Sustainable Development Goals (a set of goals for future international collaboration), which replaced the Millennium Development Goals and became part of a wider 2030 Agenda for Sustainable Development. Today’s sustainable development stakeholders (those who take part in the promotion of the SDGs) are divided into three groups: ecological (such as nonprofit organizations), economic (local communities and the international community), and social (public authorities, stockholders and others).

Launched in 1995, the project of the Center was supported by the US Green Building Council and American Institute, which makes it a vivid example of collaboration between a city and a university.

“A university campus can generate ideas concerning the development of smart and sustainable cities. A sustainable city is a complex system where all social and economic aspects are in harmony: waste management, green areas, democratic administration, the interaction between citizens and environment, and many other things,” explains Irina Shmeleva, an associate professor at ITMO’s Institute of Design & Urban Studies, the head of the Institute of Sustainable Development Strategy NPO, and an expert at the United Nations Development Program.

The concept of SDGs is very popular in many European countries. In 2010, a project was launched called “Europe’s green capitals”. Every year, European cities compete for the title of the greenest capital. What is remarkable about this initiative is that it’s not only big cities that win in this competition but smaller ones as well. In 2019, the first place went to Oslo.

Among the most pressing social issues over which the citizens, development companies and the city administration don’t see eye-to-eye is real estate development in green areas of the city. For example, in one residential area near the Kupchino metro station, a park was cut out to be replaced with a high-rise apartment building (we have already written about a map featuring all trees in the city here).

At the end of 1980, St. Petersburg’s tram network was included in the Guinness World Records as the biggest in the world. The length of tram lines in the city accounted to 692 km, but after a while trams were outnumbered by cars and many places where there used to be tram lines were transformed into roads. Among the examples is Ligovskiy Avenue, where this transformation was followed by all the trees being cut out. However, experts note positive changes as well, such as the development of the city’s bicycle infrastructure.

The United Nations declared the years 2005 to 2014 as the Decade of Education for Sustainable Development (DESD). As part of this project, many universities around the world changed the principles of their work in accordance with the paradigm of sustainable development.

“The problem of sustainable socioeconomic development is a very complex one. In this regard, we place emphasis on such aspects as environmental protection and recycling. These are the two pillars that we have to focus on if we want to achieve sustainable development,” commented Anatoly Kotov, the special representative of the Governor of St. Petersburg for economic development.